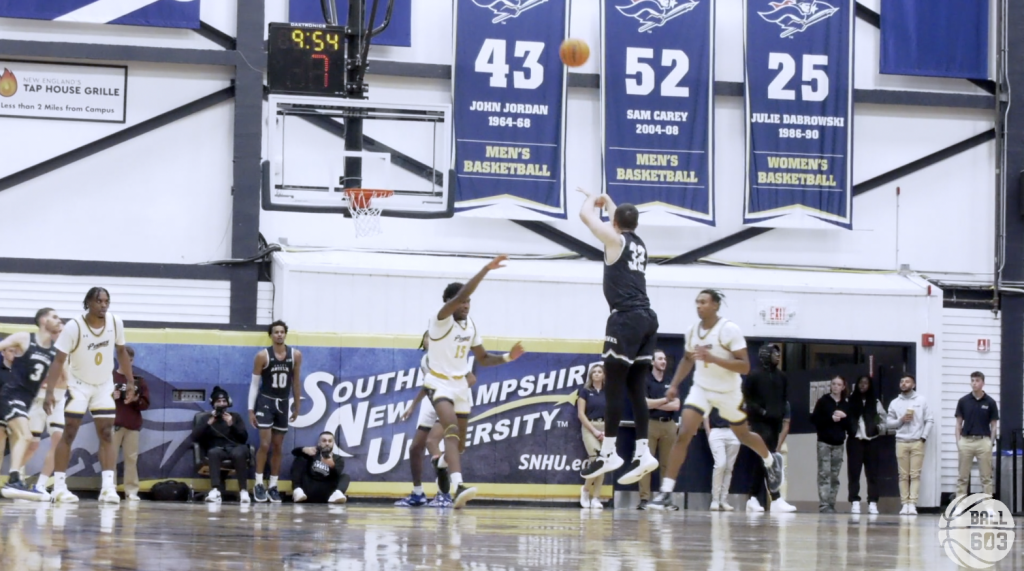 The Queen City rivalry was renewed as the Saint Anselm College men erased a 16-point first-half deficit to come back and earn a hard fought 79-67 road victory over Southern New Hampshire at a packed Stan Spirou Field House in Manchester on Wednesday night.

SNHU came out the gates firing and used a 14-2 run to open up an 18-6 lead just 3:30 into the ball game. Matt Becht connected on three-straight triples to pace the Penmen during that run.

The Hawks cut the SNHU led to eight before Becht buried another one from deep to spur an 8-0 run for the Penmen and give them their biggest lead of the night, 33-17 with 7:56 left in the half.

Saint Anselm came out of the locker room energized and opened the second frame on a 5-0 run. SNHU then struggled to make a field goal as the Penmen shot just 25.8% (8-31) from the floor in the second half.

The Hawks capitalized as they unleashed a 22-6 spurt later in the half to take a 10-point lead with just under six minutes on the clock. The Penmen then used a 6-0 run of their own to cut the lead to four with 4:28 left, but the Hawks closed things out to come away with the 12-point win.

The Hawks now led the all-time series over the Penmen, 40-36, and have won nine of the last 11 meetings, including seven of eight. Saint Anselm has also been victorious in five of the last six meets at SNHU, dating back to the 2017 NE10 Championship title game March 4, 2017.

Check out full highlights of the action by our Tim Lee…