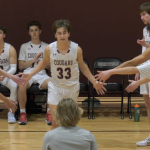 Junior Jack Krasnof tallied a career-high 39 points to lead Derryfield to a 68-38 win over visiting Epping on Monday night in Manchester. The Cougars held the Blue Devils to just four first quarter points and never looked back as they cruised to the big win. Epping was paced by Henry Hodgkins with a team-high 16 points. 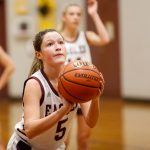 Behind a game-high 19 points from Ava Buchanan, the Portsmouth Christian Academy girls flew past a shorthanded Sunapee squad, 50-18, on Monday night in Dover. Hannah Dion (16 points) and Maddie West (10) also tallied double figures for the Eagles. PCA improves to 2-0 on the season, while the Lakers, playing without Liz Tschudin and Katelyn Claus, drop their season opener.

Check out photos of the action below by Jill Stevens. High resolution downloads and prints of the photo gallery below can be purchased here. 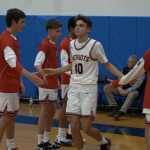 Josh Robie pumped in 31 points, including 15 in the third quarter alone, to lead Profile to a convincing 68-36 victory over visiting Gorham on Friday night. Check out some highlights of the action shot by Ethan Kimball. 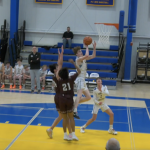 The Eagles were paced by 16 points from Gavin Nagy. 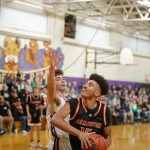 The Farmington boys varsity basketball team racked up 23 points in the first quarter and 24 points in the 3rd quarter en route to a 68-35 victory over Route 75 rival Nute on Friday night in Milton. The Tigers boasted four players in double figures and were paced by senior Jordan Berko’s game-high 17 points.

Check out photos of the action below. High resolution downloads and prints of the photo gallery below can be purchased here. 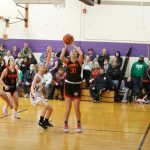 Freshman Anna Cardinal poured in a game-high 14 points, all in the first half, in her high school debut to lead the Farmington girls varsity basketball team to a 50-11 victory at Nute on Friday night. Senior Makayla Lapanne chipped in with nine of her own for a short-handed Tigers team that was playing without sophomore star Madi Ricker.

Check out photos of the action below. High resolution downloads and prints of the photo gallery below can be purchased here. 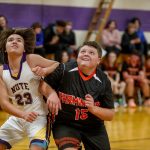 The Farmington JV boys basketball team opened the 2022-23 season with an impressive 54-21 victory over Nute on Friday night in the first game of a tripleheader between the Route 75 rivals. First-year head coach Tanner Gibbs earned his first career win for the Tigers. Check out photos of the action below. High resolution downloads and prints of the photo gallery below can be purchased here. 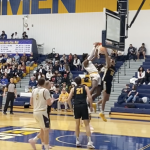 MANCHESTER, NH – The SNHU Penmen improved to 2-1 in Northeast-10 Conference play with a 70-65 win over visiting Adelphi last night at the Stan Spirou Field House. SNHU was led by a game-high 27 points from junior Matt Becht.

Check out the highlights, presented by New England Furniture, that were shot and edited by our very own Tim Lee, a former 1,000-point scorer at SNHU himself! 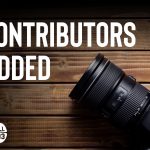 The 2022-23 season is just around the corner and new contributors continue to be added to our coverage!

Dave Beliveau of Goffstown will be providing photo coverage of select Grizzlies boys and girls varsity basketball games. And, Rick Wilson of Rick Wilson Photography hails from Amesbury, Mass. and plans to cover games in the Portsmouth area this year for us.

Welcome aboard, Dave & Rick, and thanks for sharing your passion for photography and New Hampshire hoops with all of us.

If you’re interested in joining our contributors program, don’t hesitate to reach out. 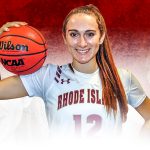 Former Hinsdale hoops star Angelina Nardolillo is just five games into her sophomore season at Rhode Island College and continues to make some serious noise at the collegiate level.

Coming off a freshman campaign that saw the 6’1″ forward earn Little East Conference Rookie of the Year accolades, Nardolillo has picked up right where she left off. Through five games this season, she is averaging 10.7 points and 6.7 rebounds and most recently turned in an impressive 21-point, 11-rebound performance in a convincing 72-43 win over Wesleyan on Sunday afternoon.

While the individual stats are impressive, Nardolillo and the Anchorwomen have their sights set on bigger things. “The goals for this season are another LEC championship and a deeper NCAA run,” said the former Hinsdale 1,000-point scorer.

Last year, RIC won the LEC conference tournament before suffering a tough three-point loss in the opening round of the Division III NCAA Tournament versus St. John Fisher, 55-52.

This season, Nardolillo is flourishing alongside senior forward Izabelle Booth. “Izzy and I clicked,” said Nardolillo. “We are best friends on and off the court. I feel like we’re always in the right place at the right time and I know that if teams are doubling down on me, Izzy is wide open.” Combined, the tandem is averaging 26 points and 15 boards per contest.

The success that Nardolillo is seeing at the next level should come as no surprise to anyone that is a fan of NHIAA sports. Nardolillo was a three-sport star at Hinsdale, earning first team All-State accolades in basketball three times and was also an All-State pick in soccer (first team) and softball (second team).

Nardolillo’s grit also comes from Hinsdale girls basketball head coach Terry Bonnette. “He taught me mental toughness, tenacious defense and showed me what it takes to get to the next level and be successful,” she added. “All I had to do was listen and I did.”

Nardolillo may be reunited with Bonnette in a few weeks and listening to the cheers of the Hinsdale faithful once again as the Anchorwomen travel to Keene State to take on the Owls on December 10th. It’s just a short 30-minute drive from Hinsdale High School to Spaulding Gymnasium in Keene and it’s sure to be a long-awaited reunion for some Pacer fans and Nardolillo.

“Unfortunately last year with Covid restrictions, no one could come to my game at Keene and I had a lot of people texting me, telling me how upset they were that they couldn’t make it,” Nardolillo said. “But thankfully this year we have fans and I will have a lot of people there for the RIC team!”

If you’re unable to catch Angelina’s return to the 603 in person, you can watch the action live on the Owls Media Network (https://www.littleeast.tv/keene) on Dec. 10th at 1:00 pm.

Best of luck to Angelina the rest of the season as she represents the 603 in the NCAA.